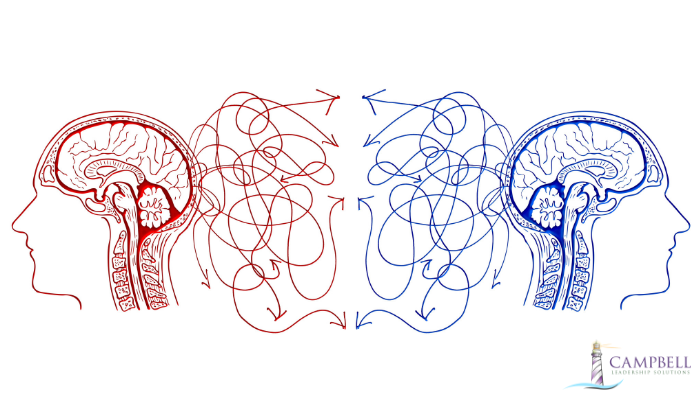 “I would rather work with you on the one thing we agree on fight with you over the nine things we disagree on.”

No-one comes to work each day to make your life hell. (Well, almost no-one. Granted there are a few psychopaths out there but they are in the minority.)

No one gets up in the morning and says, “Today I am going to be the most difficult person at work.”

Take the scenario of Amy and Peter (1). Amy has a value set aligned with leadership and people and personal growth. She recently stepped out of her role as a Director in a global firm where she led a team of 160 people.  When she initially took the position five years ago, she did so with the belief that 4-5 years in the role would be enough.  Staying longer, in her mind, would run the risk of her becoming stagnant and blocking progression for other employees.  Stepping out of her role demonstrated Amy’s integrity and commitment to her values. She believes that stepping away is the ‘right thing’ to do.

Peter is Amy’s manager. He is an Executive Director and, in a time when the company is going through significant change, and some uncertainty demonstrates his value of loyalty and stability and achievement by driving hard for employees to meet KPIs, reduce costs and promote certainty.  He sees Amy stepping out of her role as a threat to all of those things. Peter is getting significant pressure from his boss at the moment to meet budget and increase compliance, and this is taking much of his energy. The company, experiencing a state of flux, has no defined role for Amy to move into at the moment so there is uncertainty around where she should be employed and, indeed, her future in the company.  Peter believes that it was wrong for Amy to step out of her role and that, now, the ‘right thing’ is for Amy to take whatever position she is offered so Peter can get back to focusing on meeting the demands of his boss.

Needless to say, Amy and Peter are currently experiencing some tension and having some interesting conversations.

In my role as Amy’s coach, I have listened to her lament how ‘short-sighted’ Peter and the company are, how they don’t seem to understand what she is trying to achieve here, and how the overly heavy focus on metrics and compliance is driving morale of the company down.  I have encouraged Amy to try and understand what Peter’s ‘right thing’ is so that they can find common ground from which to work together.  We have discussed how, from Peter’s point of view at the moment, the number one priority is to provide as much stability and certainty at the moment. With that view, and a low ability to see things from others’ point of view, Amy’s move out of her role is a decision he doesn’t understand.

Seeing positive intent in people’s actions is a useful way to find common ground from which you can start working together. Remember, people don’t come to work every day with the specific intent of getting it wrong.  So, if we can begin to understand what other people’s ‘right thing’ is, we can start to see what they are trying to achieve.

If you’d like to test yourself, try these scenarios (2):

One point to note: Sometimes, the right thing might be about survival rather than flourishing, growth or surviving.

Have you ever disagreed with someone, only to discover later that their heart was in the right place? Feel free to comment below so we can all learn from each other.

Do you know someone who is struggling with seeing the positive intent of others? Perhaps you could share this article with them.

If you are finding some of your working relationships difficult, and you could use some support to understand the right thing of others, contact me at Campbell Leadership Solutions, and we can discuss what solution is best for you.

If you want to discuss this, or any aspect, of leadership, personal or professional development, please contact me at Campbell Leadership Solutions.