What I want you to do is …. Take a different perspective. 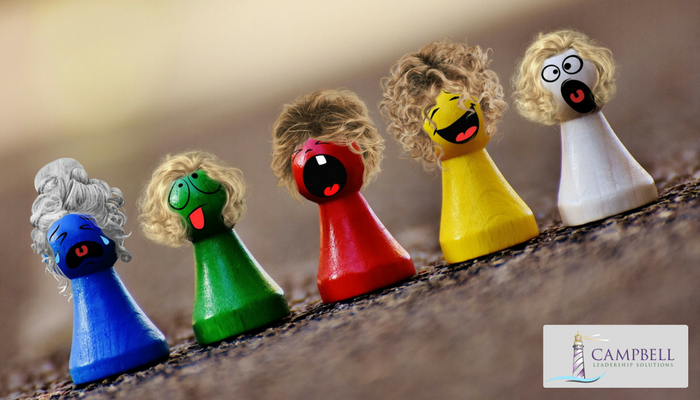 In 2002 I was one of the warfare officers in HMAS Newcastle, a ship I was privileged enough to go on to command eight years later.  The warfare officer’s role is to ‘fight the ship’ on behalf of the Captain.  Situated in the Operations (Ops) Room, you have an array of inputs to make sense of in order to make decisions about who is a friend and who is not.  Inputs include radar, sonar, electronic intercepts, intelligence reports, linked pictures and voice reports from other ships, verbal reports from the Officer of the Watch on the bridge about what he or she can see out the window — there are none in an ops room — and environmental data.  There is also information received from the ship’s helicopter.

You might think with such a vast array of information being received decision making would be easy.  Such is not always the case.  Intelligence reports can be time-late and wrong, environmental conditions may play havoc with the effectiveness of your radar and sonar, the Officer of the Watch may not be as experienced as you would like and be reporting the wrong thing, and all the information could be coming in sporadically, or all at once, making processing difficult.

In 2002 the ship was in the northern part of the Arabian Gulf enforcing United Nations sanctions against Iraq.  Primarily our role was to intercept illegal oil smugglers trying to leave the country. In an area of dense shipping, sometimes identifying the small smuggler was difficult.  One of the best assets we had to make sense of the confusing picture was the ship’s helicopter which could launch from the back of the ship, move out into the area we needed to be surveilled and, literally, give us a birds-eye view of the situation.

Now, the subject of a future post will be my own leadership journey, however, suffice to say that in 2002 I was a little angrier than I am now. I was more controlling, less trusting and more impressed with my own abilities than I had a right to be.  As a result, I tended to clash with people. At the time that didn’t matter to me.  I had a job to do and the mission was the most important thing, not necessarily the people I worked with.

One of the clashes I had was with the crew of the helicopter and specifically the pilot who also happened to be the Flight Commander, the head of the flying department on board.  The clash came about because, sitting in a small, dark box in a ship with multiple electronic and verbal inputs I often tended to second guess what the aircrew was telling me.  If what they were telling me didn’t accord with what I saw on my computer screen, or what I was ‘hearing’ from other sources, then I tended to discount their information.  As you can imagine, this tended to upset the pilot and his crew.  One day, after a heated argument between us, he went to the Captain and demanded that I accompany the flight crew on the next mission. The Captain’s decision to agree to the flight commanders request, over my objections, was one that changed my perspective.

We launched that afternoon and immediately my eyes were opened.  I could now see how clear a picture they had.  From the aerial perspective, I could see how wrong I had been to lack trust in the information I was receiving from the helicopter. This fundamentally changed our working relationship for the rest of the deployment as trust was re-established.

A different perspective can help.

Taking the perspective of others can help you deal with complexity.  Jennifer Garvey Berger and Keith Johnson, in their book Simple Habits for Complex Times, talk about three habits for operating in complexity; asking different questions, seeing systems and, relevant to today’s article, taking multiple perspectives.  They write:

“The very best leaders don’t think in terms of us and them; they don’t think in terms of enemies. There are people who want different things, but each person tends to act from a place that she considers an honourable and rational approach, no matter how horrible it seems to you.  There is power in knowing the other perspective, not to use it against a person in some way but also to learn from it.”

Often, I ask my clients the following question:

“Do you think that Person X (your boss, your peer, your subordinate) comes to work each day wanting to make your life miserable?”

After we get over the usual banter of, “It feels like it” they usually come up with an answer of, “No”.  This is when I ask the next question:

“What do you think Person X (your boss, your peer, your subordinate) is trying to achieve every day they come to work?”

The usual answers at this point are something like, “They are just trying to do the best job they can, the best way they know how.”

Normally, early on in my articles, I ask you to think about situations as they relate to the topics we are talking about. I haven’t done that yet and I am asking you to do it now.

Who, in your workplace, do you have a difficult relationship with? Is there someone with whom you always seem to have a difference of opinion?  Have you thought of someone? Good. Read on ….

Now, ask yourself, what is that person is trying to achieve at work?  99 times out of 100, I expect that your response will be similar to the one I highlighted above.  They are just trying to do their best, make a difference and achieve what they perceive is the best outcome. Now that you are looking at them in that fresh light, how can taking their perspective help you?

Here are a couple of examples of the benefits of taking others’ perspectives from clients I have worked with:

What examples do you have where taking a different perspective has helped you?  Please leave your thoughts in the comments section below.

Over the next week, take some time to notice those around you.  Don’t limit this activity to those you have difficulties with. Look at those who you interact with every day.  Put yourself, as best you can, in their shoes.  Ask yourself, “What are they trying to achieve today?” and, “What can I learn from understanding where they are coming from?”  Then, notice what answers you come up with and how it impacts on how you deal with the complexity of your job.

I look forward to reading your thoughts on how it worked, or didn’t, in the comments section below.

Do you know someone who has trouble understanding others’ perspectives?  Please feel free to share these thoughts with them.  I encourage you to open up a conversation in your workplace about taking multiple perspectives and the benefits of doing so.  Again, we can all learn from your experiences so your comments about your insights are welcome.

If you would like to discuss the concepts discussed in this article, or any topics relating to leadership, please feel free to get in contact with us here at Campbell Leadership Solutions.  We would like to talk to you about how we may be of assistance.

And finally, thank you for reading and leading.